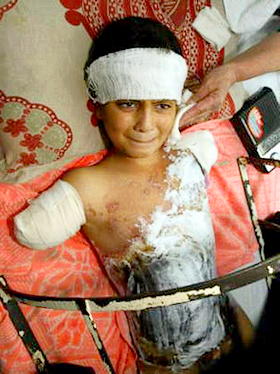 "I think they thought we wouldn't shoot kids, But we showed them we don't care. I did what I had to do. I don't have a big problem with it" - U.S. Army Pvt. Nick Boggs

CNN, Fox and the other CIA based LieNews organizations continue the deception by ceasing to show images of the ensuing battles, bombings, bloodied kids, and infernos still raging on in Iraq - Just happy people hugging pictures of George Bush. Guess where these underprivileged Iraqis got their commemorative George Bush posters... That's right, from the same CIA psy-op group who is orchestrating this latest twist on an old idea. An idea fully embraced by the human lizard Donald Rumsfeld - The idea that you can conquer the world with the big “fake out.” In Rumsfeld’s wet dream, he conquers the world by severely bullshitting them. The New World Order types like Rumsfeld believe that they can control all the humans especially the Americans with the scientific application of bogusness, lies, disinformation, fakeness, fraudulence, dizzying insider oil and arms deals, war profiteering, and a healthy splattering of bloodied kids, women and a generation of this or that countries’ young men. It’s a lie. And it’s not the America I remember. And it’s not the kind of country I want to see us transformed into permanently.

The word came down from the top - NO MORE BATTLE IMAGES. That would send out a confusing message since the TV already showed jubilant Iraqis tearing down statues. JUST HAPPY SMILING IRAQIS. But wait a second, some of the most bloodiest bombing and fighting is going on right this second while we see the loops over and over again of Iraqis throwing garlands of flowers on our troops, what gives?

Right now the US media is a complete and total element of the US government and in particular the Bush administration. Right now, out of the peering eye of the TV cameras rages the bloodiest phase of this bloody filthy war for oil profits - total indiscriminate killing in the outer cities to affect an immediate way out of the quickly building QUAGMIRE.

The Administration had a VERY SHORT LIVED, “I TOLD YOU SO.” The reality is starting to leak out about what really happened there and what is continuing to happen there - They are “Liberating” (disfiguring or killing) thousands of little kids today, right now, after the liberation.

And since the CIA decided that you can only control people if you can successfully suppress the truth, their news service, CNN, will no longer even bring you ANY pictures of the reality of war. Their lying agenda has shifted to the new lie, which is, how wonderful the Iraqi people think their new conquerors are - just smiling happy Bush loving shiites. So voxnews will bring you the real pictures about what is really going on.
vox

A missile obliterated his home and most of his family, leaving him orphaned, badly burned - and blowing off both his arms.

With tears running down his face he asked: "Can you help get my arms back? Do you think the doctors can get me another pair of hands? If I don't get a pair of hands I will commit suicide.

"I wanted to be an army officer when I grow up but not any more. Now I want to be a doctor - but how can I? I don't have hands."

Lying in a Baghdad hospital, an improvised metal cage over his chest to stop his burned flesh touching the bedclothes, he said: "It was midnight when the missile fell on us. My father, my mother and my brother died. My mother was five months pregnant.

"Our neighbours pulled me out and brought me here unconscious.

"Our house was just a poor shack. Why did they want to bomb us?"

He did not know the area where he lived was surrounded by military installations.

Hospital staff were overwhelmed by the sharp rise in casualties since US troops moved on Baghdad and intensified the aerial assault.

Ambulances rushed in with victims, many carried in bedsheets after running out of stretchers.

Doctors struggled to find them beds. Staff had no time to clean the blood from trolleys. Patients' screams and parents' cries echoed across the wards.

With many staff unable to get there due to the bombing, doctors worked round the clock performing surgery, taking blood, giving injections and ferrying wounded.

Dr Osama Saleh al-Duleimi, an orthopaedic surgeon and assistant director at Kindi, said they were overloaded and suffering shortages of anaesthetics and painkillers.

The Red Cross has been touring hospitals with first aid and surgery kits. Spokesman Roland Huguenin-Benjamin said: "They were overwhelmed by sheer numbers - during fierce bombardment they received up to 100 casualties an hour."

Doctors who treated victims of the 1980-88 Iran-Iraq war and the 1991 Gulf War were taken aback by the injuries. Dr Duleimi, 48, said: "This is the worst I've seen in the number of casualties and fatal wounds.

"This is a disaster because they're attacking civilians."

"Before the war I did not regard America as my enemy. Now I do. War should be against the military. America is killing civilians."